Performance of RAID Arrays on Windows Azure: an Alternative to Horizontal Scaling

by Sergey BalashevichJanuary 28, 2014
This blog post shares the results of the performance comparison of a single virtual drive and different RAID arrays types.

While working with several different NoSQL databases heavily loaded with write requests, we faced a situation when the hard drive became a bottleneck. Scaling the cluster horizontally could easily solve this kind of problem, but it would also increase monthly payments. This is why we decided to take a look at other options.

The first thing that comes to mind when a database starts experiencing the hard disk drive (HDD) performance issues is to combine several virtual drives into a RAID array. To check how it will work with the Windows Azure virtual infrastructure, we compared the performance of a single virtual drive and different RAID arrays (types: 0, 1, 4, 5, and 6), using the Bonnie++ tool for hard drive subsystem verification.

In this blog post, we share the test results and step-by-step instructions on how to configure a RAID array on your own.

In the first test, we measured the performance of different RAID arrays for simple read/write operations:

The first test results can be seen below. The x-axis stands for megabytes per second, the y-axis indicates repetitions (we ran each test 10 times). 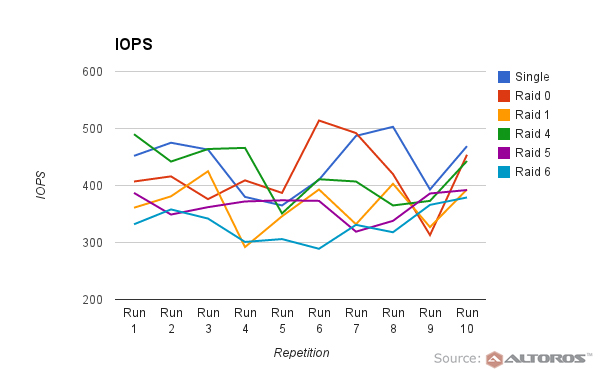 According to these results, RAID 0 demonstrated the best performance in the write test and almost the same results in the read test. The IOPS values ranged from 350 to 450 for all RAID types.

We ran the same test on both VMs.

The diagram below represents the results of RAID read and write tests.

The last test was to check how stable Azure storage is. Here, we consequently tested RAID performance under a workload for 8+ hours. 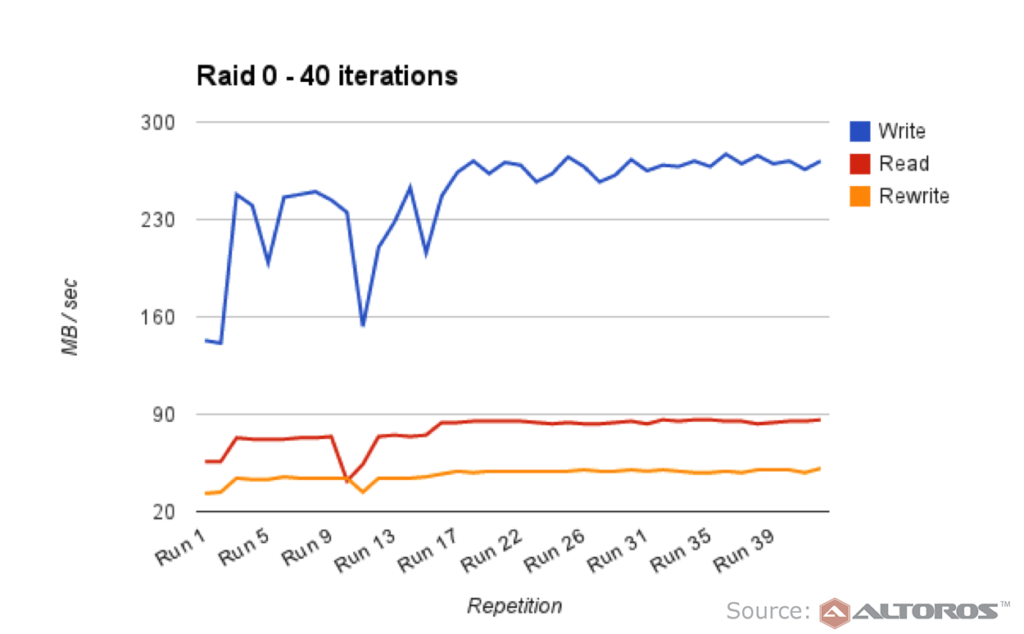 Given the results of all three tests, we can make the following conclusions: 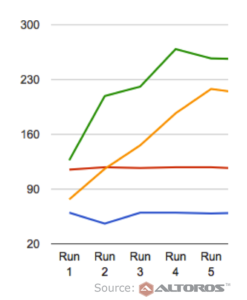 Red and blue lines represent the servers that had already been used in Test 1. Green and yellow lines stand for the new servers that we started for Test 2. Every time a new server is created and starts using HDD heavily, it takes ~30 minutes for it to accelerate to the maximum speed.

How to configure a RAID array

The following steps will help you to set up a RAID array for your own project:

That’s it. Now you can start using your new disk. Still it is worth reading the “Saving your RAID configuration” section here.

We’re also planning to run other tests for RAID arrays on Windows Azure. In particular:

The post was written by Sergey Balashevich and edited by Alex Khizhniak.

Sergey Balashevich is Head of Software Development at Altoros. Over the last 10+ years, he has tried his hand at a long list of technologies. Currently, he is mostly working with the Java stack and platforms, such as Amazon Web Services, Microsoft Azure, Pivotal Cloud Foundry, HP Helion, etc. His primary activities are around designing cloud-native architectures and leading teams of engineers building distributed solutions.

Continuous Integration with Jenkins and Travis CI
Next