Overview of the Eclipse Plug-in for Cloud Foundry

by Sophia TurolJune 5, 2015
Adam Gunther of IBM overviews the CF Eclipse plug-in, including a demo of how to push an app to CF without using the command line.
Why read this?
FOR A DEVOPS PRO

Though it's a DevOps world we are struggling for, there is still some separation when it comes to tools. This video demonstrates how the Eclipse plug-in allows for managing operations (e.g., working with BOSH and OpenStack) straight from the developer workspace.

If you deploy and manage your Java and Spring apps using Eclipse, you wouldn't like to have another IDE when adopting CF. The demo explains how the plugin enables you to push an app to CF right from Eclipse—even without using the CLI.

If you can dream it, you can build it

Adam Gunther of IBM makes a piquant observation and throws down a provocative challenge in this presentation about the Eclipse plug-in for Cloud Foundry.

The observation: “As the developer and operator in the DevOps world truly become one, I don’t know why from a tools perspective we’re still keeping things separate.”

The challenge: “Come to the community and help us build. If you can dream it, you can build it.”

Eclipse has been widely adopted over the past decade-plus. Originating from an IBM codebase, written mostly in Java, and used to develop applications in numerous popular programming and scripting languages, it is supported by a foundation with more than 100 members and more than 1,700 plug-ins to date.

Gunther says the new plug-in addresses the fundamental issue of helping developers be more productive. “With Eclipse, we have great governance and a vibrant community,” he says, noting that he would love to see the same things evolve within the Cloud Foundry Foundation community.

He spends some time discussing the relative merits–and cultures–of command-line programmers and IDE programmers, noting that in an increasingly complex world of more complex deployments and debugging, that an IDE’s advantages become more highlighted. Extensions are show in the graphic below: 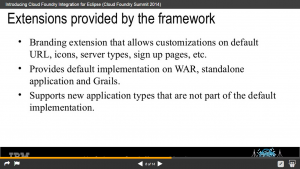 “Who knows where your instances are running,” he asks. “In a world of deploying to different environments, with DevOps and continuous integration, there’s nothing wrong with tools to help you.”

He takes his audience through a demo to illustrate the ease of use, and asks questions addressing issues such as how to build on top of stuff Pivotal was working on, how to help with services integration, remote debugging, and incremental deployments. He said there’s a plan to release new code every six weeks for the Eclipse/CF plug-in. But as for now, “nobody but IBM and Pivotal are in the community. Eclipse can be broader, (and) we’d love to see more people participating.”

He points out that vendors can build their branding on top of this, as IBM already does with Bluemix. For example, “we’ve added some specific server adapters that are only useful in Bluemix,” he points out. “We dont want to bloat the core, but let people extend and build on top of it.” A couple of specific examples would be things like documentation and sign-in procedures.

“DevOps is continuous integration; these worlds are coming together,” he notes. “So, for example, why can’t I do things with BOSH and OpenStack straight from the framework? Straight from the developer workspace?”

Note: For developers and operators who wish to address these questions in their own unique ways, he provided a couple of useful slides, as well as a list of useful links: 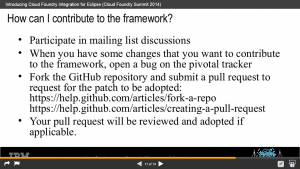 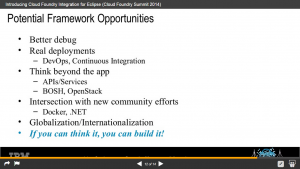 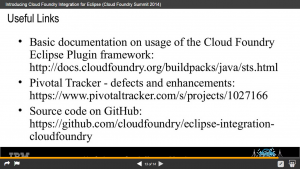 "If you can dream it, you can build it" seems to be a good enough mantra for CF developers, and there is a strong case here to include Eclipse in those dreams. This sort of freedom can be paralyzing to some, and dangerous in the wrong hands. For now, Adam’s talk here is quite inspiring.

Still, there some issues to address:

* The plug-in is open-source, community-driven. Will therefore IBM focus on integrating Eclipse with the OSS CF distribution, rather than on creating "specific adapters that are only useful in Bluemix"?

* How do we address the challenge of taking the best of what the Eclipse Foundation has done all these years and integrate that into the way the Cloud Foundry Foundation does things?

* Are there things the Eclipse Foundation has done that we should avoid?

Nevertheless, both open-source communities–Cloud Foundry and Eclipse–will benefit from this integration.

Adam Gunther is Program Director, Cloud Platform Services and Developer Advocacy for IBM Cloud Product Management. He leads a team responsible for all Bluemix services, growing the solution’s presence in developer communities and helping developers to use the platform. Adam defines strategy and investments for over a billion-dollar cloud services portfolio. He was a speaker for the Cloud Foundry Summit 2014, ThingMonk Business of Internet of Things, IBM InterConnect, etc.

Not Just for Developers, Pivotal Cloud Foundry for Ops: Four Levels of HA
Next