by Roger Strukhoff and Alex KhizhniakJanuary 10, 2019
With both platforms, the largest grocer in the US transforms its IT and gets infrastructure ready in hours instead if weeks, running 400+ apps in production.
Why read this?
Use Case for Cloud Foundry:

The need to deliver software faster

The largest grocer—and second largest retailer—in the United States, Kroger generates more than $120 billion in annual revenue from more than 3,000 locations (as of 2019).

The company’s cloud journey began in 2007 with integration of VMware into the organization. As a result, 90% of the company’s IT infrastructure was virtualized across more than 45,000 VMs. A second stage commenced in 2013 with integration of vCloud Director and vCenter Orchestrator, according to James Masters from Kroger’s IT operations side. 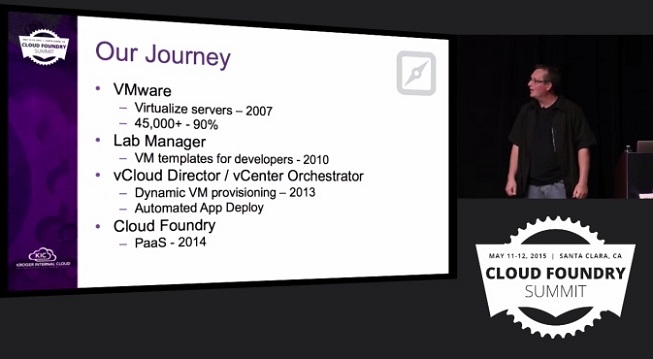 “Getting the VMs was well-received but still a challenge,” Masters explains, noting the burdens of this complex infrastructure.

To speed up the process, the devs and ops sides got into Pivotal Cloud Foundry (PCF) in 2014 “as a next step,” according to Ted Tollefson of Kroger. Within 5 years, the company managed to make PCF the standard across the departments, letting its IT teams move faster.

The company has thus arrived at what it calls its Kroger Internal Cloud (KIC) initiative. “We’re doing this from a business perspective, because we want to consolidate platforms and needed elastic scaling to scale horizontally. We need to scale more gracefully as the business continues to grow. From the DevOps perspective, we want to develop 12-factor apps and add a lot of automation.”

The integrated team uses Spring Initializr as part of its effort to automate project provisioning. 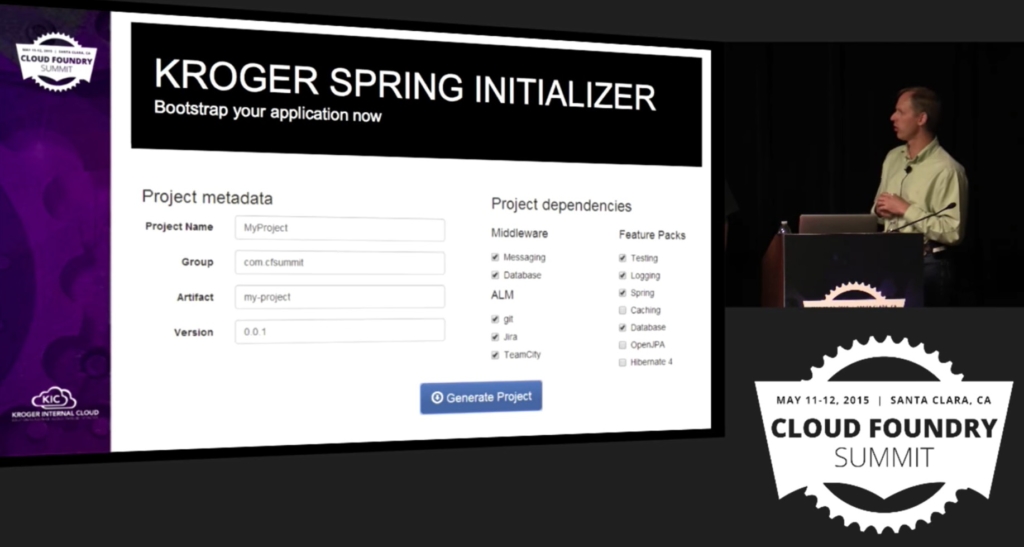 Team members can type in a few parameters and fork base sets of code, then use enhancements to create stash repo checks and create continuous integration builds. “We are able to set up best practices right from the start,” according to Masters. “It takes 10 minutes to get code, ALM tooling, and be ready to go.” 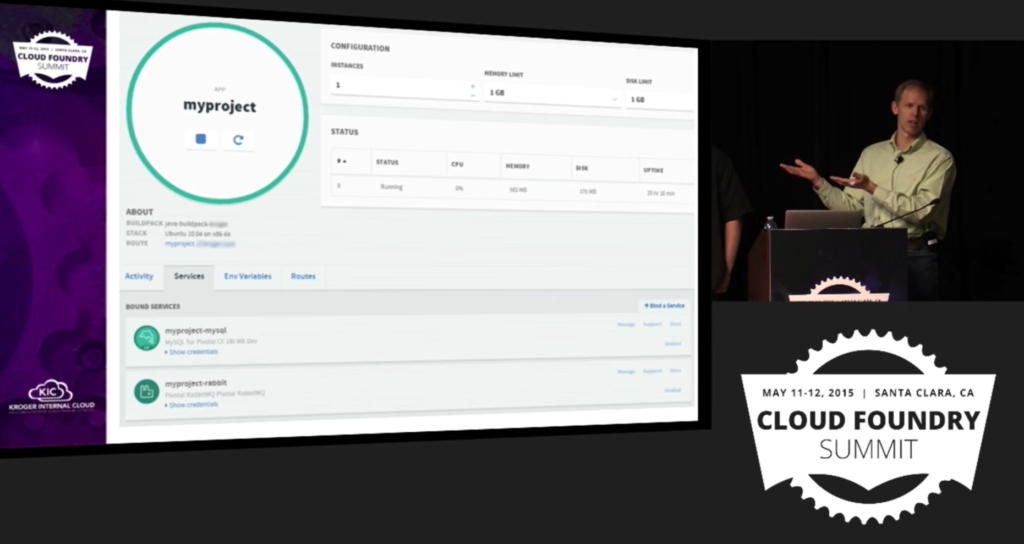 In 2015, with a pure VMware stack underneath, the company was also looking at VIO (VMware Integrated OpenStack) and “playing around” with other hypervisors. The Kroger team also was exploring additional resources to scale out with the Cassandra data store in the future.

Masters and Tollefson agree that there have been benefits to developers and to operational managers:

Within this context, Ted Tollefson says, “Devs and ops have started working more together. We do a lot of orchestration, exposing infrastructure.”

As the KIC initiative progresses, the integrated team will continue to think of infrastructure in terms of code and working to having a common platform. In this process, management buy-in is essential, as is continued teamwork. “If you spin stuff up but don’t have support, there will be a very short flight,” Masters points out.

As of 2019, Kroger runs 400+ apps and 7,000+ app instances on Pivotal Cloud Foundry. The use of PCF enables thousands of associates to work with the same platform and start up within few hours—instead of 7 days it took peviously—according to Elijah Savage, VP of Infrastructure Services at Kroger.

“With our previous platform, I had a huge amount of human capital resource invested. Today, our associates can stand up an environment, go build an application, connect to the resources they need, and get it functional in hours.” —Elijah Savage, Kroger 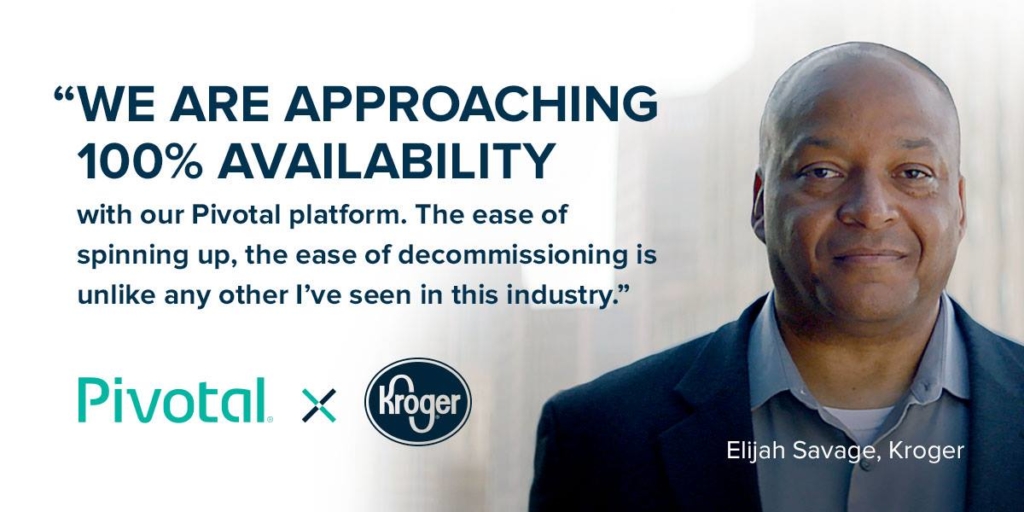 Across departments, “everyone is spreaking the same language now,” notes Elijah.

The platform also accelerated security procedures for the deployment of apps. “We used to have developers spending roughly 4 weeks of calendar time to get all the security elements they needed for their projects,” says Michael Ehrman, Information Security Manager at Kroger. “Today, they get everything they need in a few seconds.”

“We started launching apps into production, and went from 4 apps to 40 apps to 400 apps, and it’s been great for running our entire e-commerce business.” —Sean McShay, Director, Cloud Services, Software Architecture and UX, Kroger 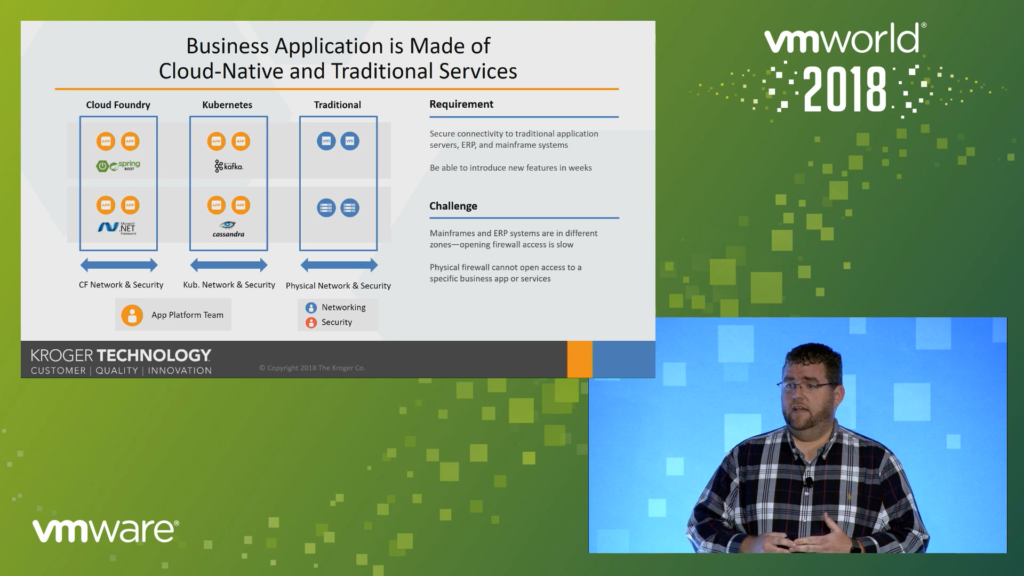 The company is also working on accelerating the results by integrating containerized apps and services between Cloud Foundry, Kubernetes, and other systems. At Kroger, an organization with a long history, even mainframes are in the mix. To support this complex environment and efficiently manage container networking and load balancing, Kroger relies on VMware’s infrastructure platforms, such as NSX-T Data Center.

Ted Tollefson has been a software architect at Kroger for almost 10 years. He has done Java EE development for over 15 years and has been actively engaged in cloud development efforts. Prior to Kroger, Ted has served as a consultant, worked for Bertelsmann in Munich, and assisted BASF within their advanced technologies group. He’s a true geek at heart and grooves on the rapid provisioning capabilities of the cloud.

James Masters has held multiple roles at Kroger since 2003. He started his career at the company in the information security space and then moved into system administration. James currently leads virtualization, cloud, and automation initiatives at Kroger, and has been doing so for over 5 years. Prior to that, James was in information security at Fifth Third Bank and in system administration at GE.

Elijah Savage is Vice President of Infrastructure at Kroger. Previously, he worked as a network engineer at Reynolds & Reynolds and CSC. Elijah is an expert in all things infrastructure, including cloud computing, data centers, networking, etc.

The post was written by Roger Strukhoff and Alex Khizhniak.

How NASA Uses Artificial Intelligence to Detect Exoplanets
Next