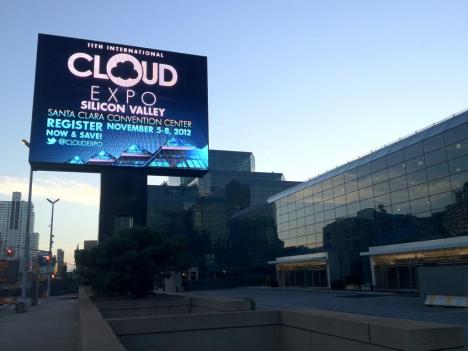 by Alex KhizhniakJanuary 10, 2013
The annual event at the Santa Clara Convention Center focused on cloud readiness and adoption, taking a deeper look at the current trends.

On November 5–8, 2012, the 11th Cloud Expo was held in Santa Clara, CA. The conference was dedicated to big data and cloud computing—the two popular trends in the IT world that have changed the way companies deal with their infrastructures.

Helping tech companies to pace with the trends

At the event, Renat Khasanshyn of Altoros was interviewed by Jeremy Geelan, Cloud Expo’s Conference Chair. They discussed the ways Altoros helps its customers to deal with big data and cloud initiatives.

Renat told a story of a company that improved its cloud architecture by opting for low-lewel technologies—aiming for better performance.

“One gaming company was using Ruby on Rails and wanted to decrease the number of servers they use. They followed the example of another gaming company, which had 150 servers and used Ruby on Rails. They’ve realized they can do much better, so they rewritten it with plain Ruby and Goliath, which works on a much lower level and takes advantage of fibers (like more of a Rack server). As a result, they’ve got 15 servers. From 150 to 15—that’s quite a lot of money saved on hosting bills.” —Renat Khasanshyn, CEO, Altoros

At the end, Renat also noted the challenges that vendors face when following the trends.

“It’s a great show to attend, a lot of great content. A lot of trends that have been started a few years ago, have now been reversed. It’s getting pretty dynamic. What we hear is that, in some technologies, some vendors are telling us, ‘Well, it’s developing so quickly that even we, at our company (this was one of the Hadoop vendors), we try to follow it, but sometimes we just get behind, because it’s drawing so fast’.” —Renat Khasanshyn, CEO, Altoros

The future of cloud computing

Renat also had a chance to take part in the exclusive Q&A led by Liz McMillan of the Cloud Expo team. This brief fireside chat centered around the issues important to enterprise cloud users. Renat noted that enterprises do not need a specific technology stack to start their cloud journey, saying, “we’ve seen companies porting mainframe applications to Hadoop in a hybrid cloud.”

A couple of questions touched upon possible predictions.

“I’m not expecting consolidation in the infrastructure space, except for acquisitions that have to hire strong engineering teams.” —Renat Khasanshyn, CEO, Altoros

Speaking about the future of big data and cloud, Renat also noted that “the startup bubble in this space will not happen anytime soon.”

The post was written by Alex Khizhniak with assistance from Olga Belokurskaya and Nadia Fedotova.