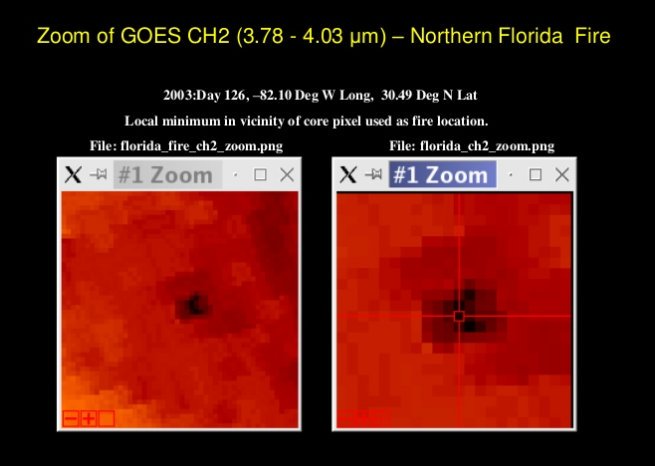 by Sophia TurolOctober 14, 2016
Artificial neural networks can be used to mimic human analyst classifications and then applied to the data from remote-sensing satellites for wildfire prediction.

At the recent TensorFlow meetup in Washington DC, the attendees learnt how TensorFlow can help in automating wildfire detection/prediction, as well as what’s underlying the framework’s four core concepts.

A calculus of variations and artificial neural networks

Dr. Kirk Borne of Booz Allen Hamilton focused on why should anyone care to use TensorFlow. In his session, he talked about automating wildfire detection / prediction through artificial neural networks (ANNs). The scope of activities under the project includes the following:

Kirk demonstrated a configuration for wildfire detection neural network and provided some classification accuracy output. He also highlighted the overfitting issue and suggested a schematic approach to avoid it. 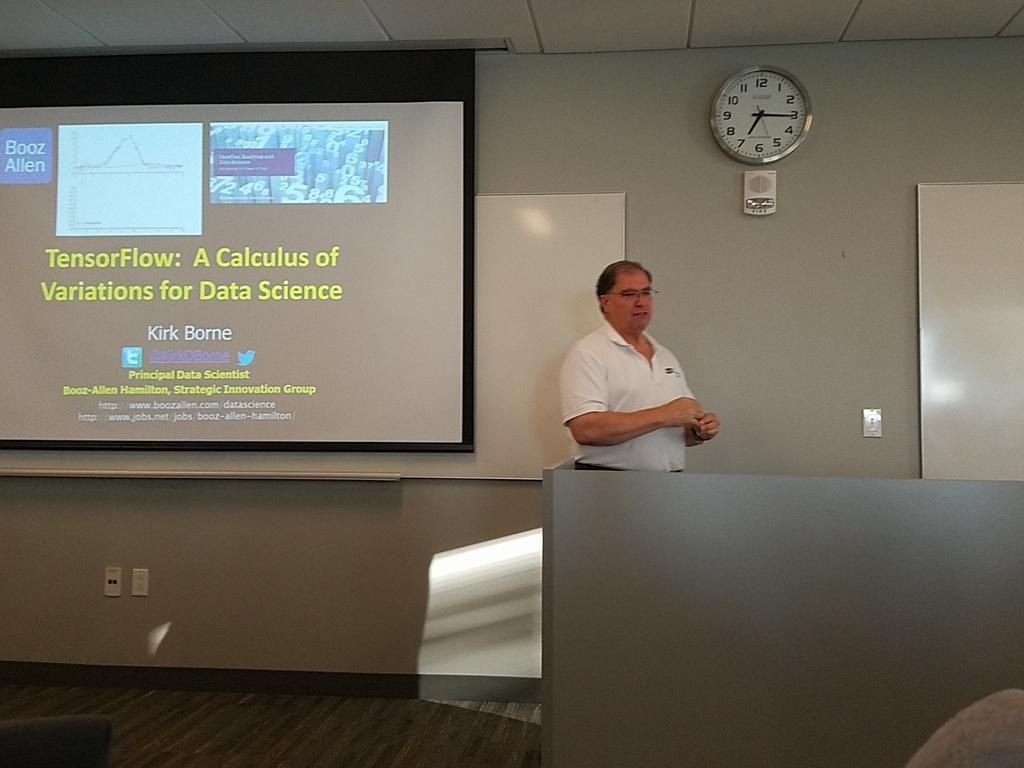 “To avoid overfitting, you need to know when to stop training a model.”
—Kirk Borne, Booz Allen Hamilton

Kirk pointed out that one should stick to minimizing true error, which can be done by using such methods as gradient descent and hill climbing. The thing is that real-world objective functions mostly feature complex topologies. This is where TensorFlow can come to a rescue by determining a calculus of variations for data science. 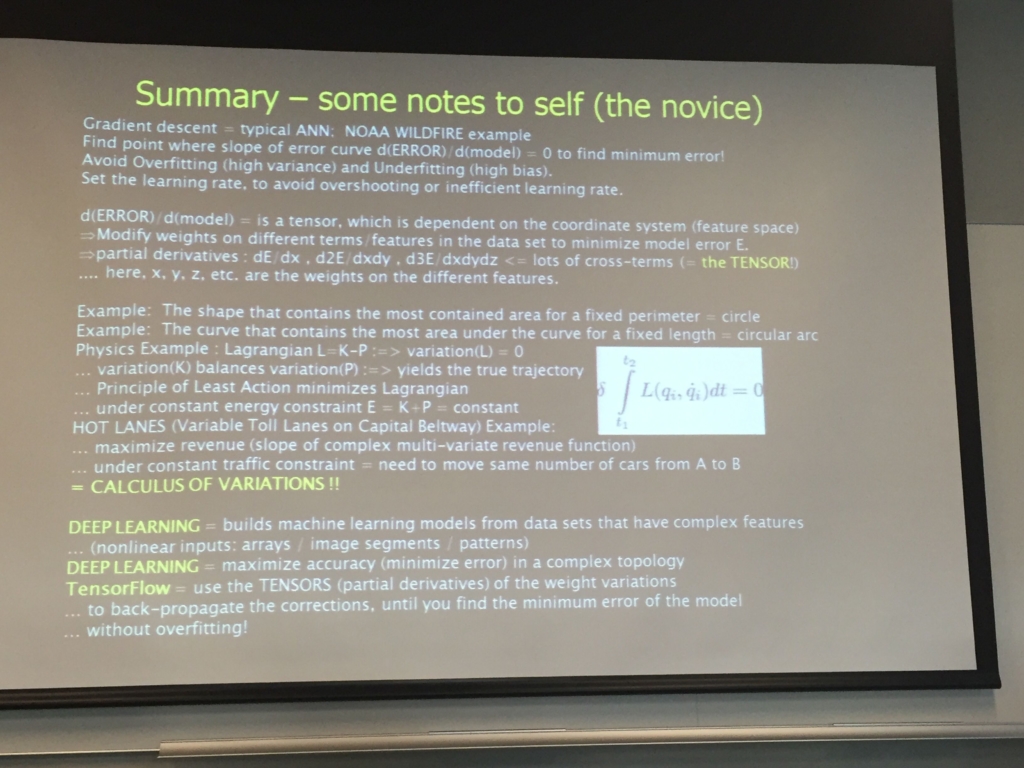 Below you will find Kirk’s full presentation.

For more details, watch the video from the meetup.

Aaron Schumacher of Deep Learning Analytics delivered a session that provides a hands-on experience with underlying mechanisms of TensorFlow:

When exploring tensors, Aaron mentioned that with TensorFlow one can do more than just neural networks, but implement a logistic regression, for example. He also pointed out that in contrast to alternatives, TensorFlow mostly ignores neurons and focuses on weights as a top-level abstraction.

As an advantage of the graph concept, Aaron pointed out the ability of TensorFlow to manipulate those graphs and “reason about” how to answer the questions asked before committing to particular execution paths. 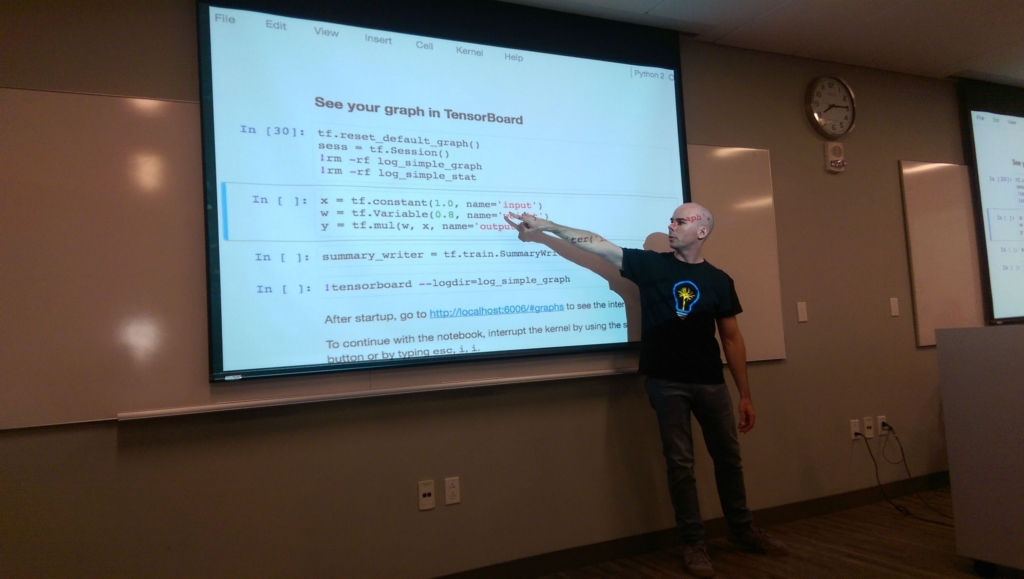 Talking about TensorBoard, he outlined its advanced logging and visualizing functionality that provides access to a lot of internals hard to expose without the tooling.

Before moving to demo, Aaron highlighted that with a highly engineered serving architecture of TensorFlow, one can develop on his/her laptop and “relatively easily build a deployment system to serve that model in a serious way.”

You can also read a relevant blog post by Aaron or watch the video for more details.

Join our group to stay tuned with the upcoming events!

Dr. Kirk Borne is the Principal Data Scientist at Booz Allen Hamilton. Previously, he has spent 12 years as Professor of Astrophysics and Computational Science at George Mason University, where he taught and advised students in the graduate and undergraduate Data Science degree programs. Before that, he worked 18 years supporting NASA projects in various roles, including program manager in the Space Science Data Operations Office and Data Archive Project Scientist for the Hubble Space Telescope. Kirk has a PhD in Astronomy from Caltech and a BS in Physics from LSU. He is an advocate of data literacy for all and has been named consistently among the top worldwide influencers in big data and data science.

Aaron Schumacher is Data Scientist and Software Engineer for Deep Learning Analytics. He has taught with Python and R for General Assembly and the Metis data science bootcamp. Aaron has also worked with data at Booz Allen Hamilton, New York University, and the New York City Department of Education. He studied mathematics at the University of Wisconsin–Madison and teaching at Bard College.

Blockchain to Reduce Intermediaries in Many Industries Outside Finance