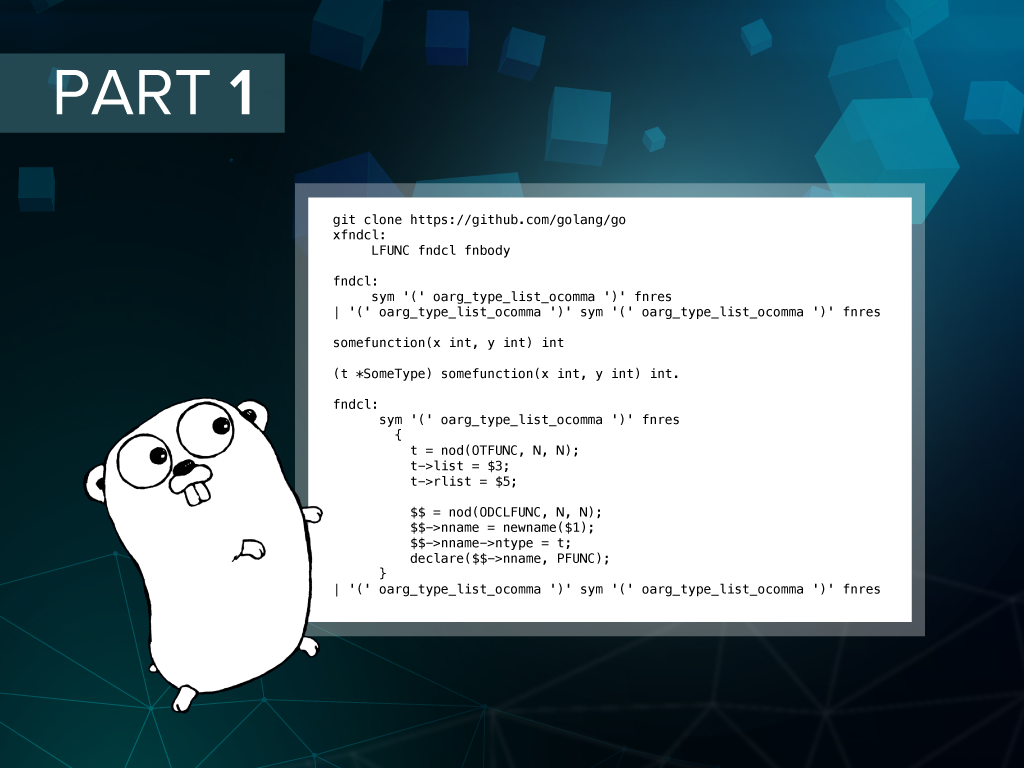 by Siarhei MatsiukevichMarch 2, 2015
This blog post explains the structure of a Go-based project, dives into the Go compiler, and overviews a Go node.

This series of blog posts is intended for those who are already familiar with the basics of Go and would like to get a deeper insight into its internals. This tutorial is dedicated to the structure of the Go source code and some internal details of the Go compiler. After reading this, you should be able to answer the following questions:

When you start learning a new programming language, you can usually find a lot of “hello-world” tutorials, beginner guides, and books with details on the main language concepts, syntax, and even the standard library. However, getting information on such things as the layout of major data structures that the language runtime allocates or what assembly code is generated when you call a built-in function is not that easy. Obviously, the answers lie inside the source code, but, from our own experience, you can spend hours wandering through it without making much progress. The goal of this article is to demonstrate how you can decipher Go sources on your own.

Before we can begin, we certainly need our own copy of the Go source files. There is nothing special in getting them. Just execute the command below.

Please note that the code in the main branch is being constantly changed, so we use the release-branch.go1.4 branch in this blog post.

If you look at the /src folder of the Go repository, you can see a lot of folders. Most of them contain source files of the standard Go library. The standard naming conventions are always applied here, so each package is inside a folder with a name that directly corresponds to the package name. Apart from the standard library, there is a lot of other stuff. In our opinion, the most important and useful folders are listed in the table below.

Inside the Go compiler

As we mentioned above, the architecture-independent part of the Go compiler is located in the /src/cmd/gc/ folder. The entry point is located in the lex.c file. Apart from some common stuff, such as parsing command line arguments, the compiler does the following:

Diving into the Go grammar

Now, lets take a closer look at the second step. The go.y file that contains the language grammar is a good starting point for investigating the Go compiler and the key to understanding the language syntax. The main part of this file consists of declarations, similar to the following:

In this declaration, the xfndcl and fundcl nodes are defined. The fundcl node can be in one of the two forms. The first form corresponds to the following language construct:

and the second one to this language construct:

The xfndcl node consists of the func keyword that is stored in the LFUNC constant, followed by the fndcl and fnbodynodes.

An important feature of Bison (or Yacc) grammar is that it allows for placing arbitrary C code next to each node definition. The code is executed every time a match for this node definition is found in the source code. Here, you can refer to the result node as $$ and to the child nodes as $1, $2, etc.

It is easier to understand this through an example. Note that the following code is a shortcut version of the actual code.

First, a new node is created, which contains type information for the function declaration. The $3 argument list and the $5 result list are referenced from this node. Then, the $$ result node is created. It stores the function name and the type node. As you can see, there can be no direct correspondence between definitions in the go.y file and the node structure.

Now it is time to take a look at what a node actually is. First of all, a node is a struct (you can find a definition here). This struct contains a large number of properties, since it needs to support different kinds of nodes and different nodes have different attributes. Below is a description of several fields that I think are important to understand.

Now that you understand the basic structure of the node tree, you can put your knowledge into practice. In the next post, we will investigate what exactly the Go compiler generates, using a simple Go application as an example.