Join the webinar to learn how a real-life problem in KYC (know-your-customer) management is significantly reduced with the use of the innovative Hyperledger blockchain technology.

According to norbloc, financial institutions can achieve 30% savings by using the platform, with minimal change of internal KYC procedures and limited system integration.

Why join the webinar:

This session will show how the blockchain technology can apply to a KYC use case for simpler compliance process.

Vitalii Demianets from norbloc will present a blockchain platform powered by Hyperledger Fabric technology. He will speak on the challenges (legal and technical) that norbloc team faced in producing their KYC solution and how one can reason about choosing the best platform to work on for their blockchain application.

A Hyperledger Project member, Norbloc is a software company with headquarters in Stockholm, Sweden. Norbloc is a blockchain platform and applications provider, focusing on financial services and government initiatives.

Vitalii is a full stack software architect, with a specialization in blockchain protocols and embedded software. Previously, Vitalii was the lead developer of KnCMiner, and prior to that spent 15 years as the Head embedded software engineer at telecom equipment manufacturer Factor-SPE in Ukraine.

Vitalii holds a MSc in Applied Mathematics from the Moscow Institute of Physics and Technology. 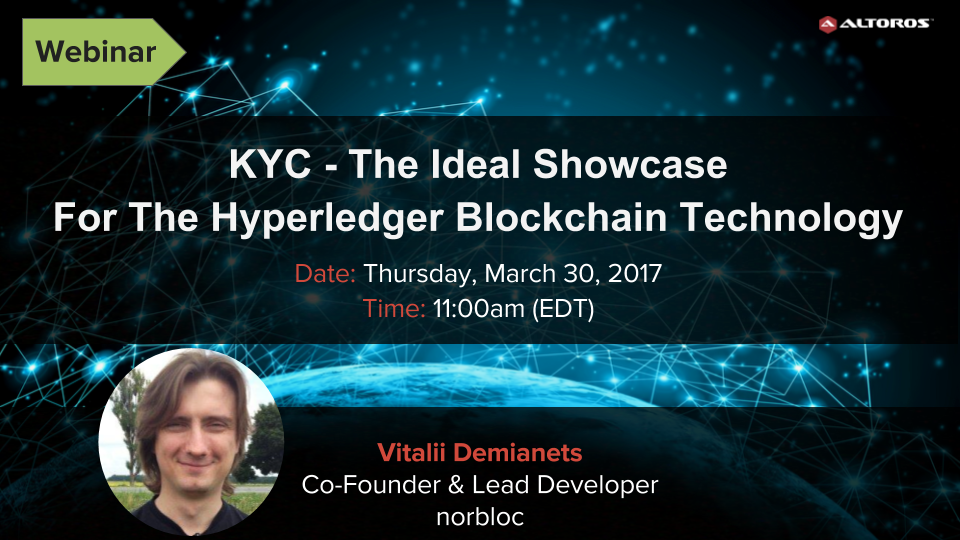